Posted on December 28, 2011 by sherijkennedyriverside 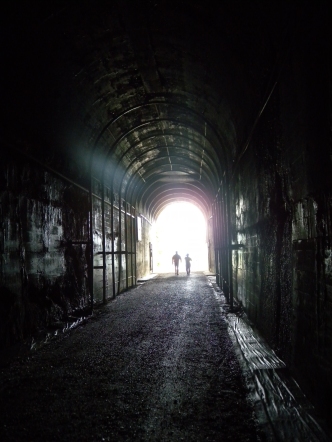 From Weigh the Day

He squinted at the space beneath the window shade and pulled it securely down, although it was a grey November day out there.  Despair smiled and stretched his webbed wings in pleasure.  Darkness was their friend.

No matter how much Despair indulged Ben’s guilt-induced self-abasement, the idiot never gave up appreciation of what he had.  It was infuriating.

Hope danced along the frame of the window, highlighting the view as an array of white sunbeams broke through the clouds and lit the water.

Perhaps he’d wallow in the mire of guilt he’d laid for himself in taking the blame for driving his wife away.  Despair took evil delight in that one, since his snare of arrogance and self-pity worked the charm of obscuring the woman’s flaws from the man.

Ben swore he could remember the agony he had caused his mother at his birth.  It made a mark on his soul… He had resigned himself to dying before he ever lived, feeling that she deserved to have his share of life, and bemoaning that what life she had, she couldn’t live free of pain. Despair had followed him since that day.

He stumped down the hill to the nearest bus stop and leaned on the shelter trying to catch his ragged breath.  The bus rounded the corner.  He had timed it right to save the effort of settling onto the bench and having to drag himself up again.  Hope and Despair stole glances at one another, used to Ben’s ironic juggling of negative bright sides.

Hope seized the moment and swished her hand toward the late morning light glowing on the white library building.  Sensitive Ben, followed the prompt and decided to drop off his books at the library instead of the grocery store book drop. Hope jumped from foot to foot in delight as he actually rushed to grab the bell cord to stop the bus.  Not only would he be delayed, he would see his friend Ann the librarian too.  It might be Hope’s day today.

Ben began to encourage her selflessly.  His spirits rose with every bit of caring time he gave her.  Hope gloried in it.  Gifts of empathy were her favorite.  She had no worry that time was passing on the chance meeting with Marilyn.  Hope’s is a fluid world, and as long as love is flowing and joy runs freely, the path doesn’t matter to her at all.

Despair…came back just in time to hear Ann turn to a story of her sister’s rough delivery of her nephew.  He cracked his knuckles, ready to take a chokehold on Ben’s psyche once more.  But Ben’s concern for Ann shielded his heart from feeling his own wounds.

Despair rode him like a taskmaster, keeping his focus on the discomfort so he almost missed the eagle flying over the bay.  But Ben felt the creature nearby.  The eagle soared through him, thrilling him with its awesome strength and beauty.  Hope leaped into the air, following the great bird on the updraft of happiness.

And right on cue—in came Marilyn.  After spouting the story to her in his fevered enthusiasm, he accepted her invitation to lunch.  She gave him her keys so he could go rest his bags and his bones in her car while she shopped.  When she came out, instead of finding him sleeping in his seat, she found him propped against her back bumper pointing out the path in the sky as he shared the beauty of the raptor’s flight yet again with an older lady that hung on every syllable.  “I was so thankful I looked up…” Marilyn heard as she approached.  It was Hope that rested content in the car anticipating a wonderful lunch between friends.

Despair slunk back to Ben’s apartment to wait.  Lurking in the dark corners until Hope’s day faded, and he could get the man inside.  He recounted his treasures—guilt, self-deprecation, and isolation and held them tightly in his hand, planning never to let them go.

Left brain, right brain, I can't decide. After many years of successful visual arts pursuits, I'm working on my other creative inclinations. For the past 8 years, writing has been my second full time job, and it's worth every sleepless night. Sheri J. Kennedy grew up mostly a city-girl coasthopping from Seattle to rural Pennsylvania, Miami and back to Seattle. She currently resides on the banks of the Snoqualmie River in the scenic Cascade Mountains. Her heart has found its home.
View all posts by sherijkennedyriverside →
This entry was posted in Literary Fiction, Photo and tagged companion book, grey november day, hope and despair, snoqualmie tunnel, white library. Bookmark the permalink.