Posted on May 26, 2015 by freevalleypublishing
i
Rate This

Wednesday, May 27,2015 at 7pm is our big performance. Free at Boxley’s Jazz Club! See below for more information… 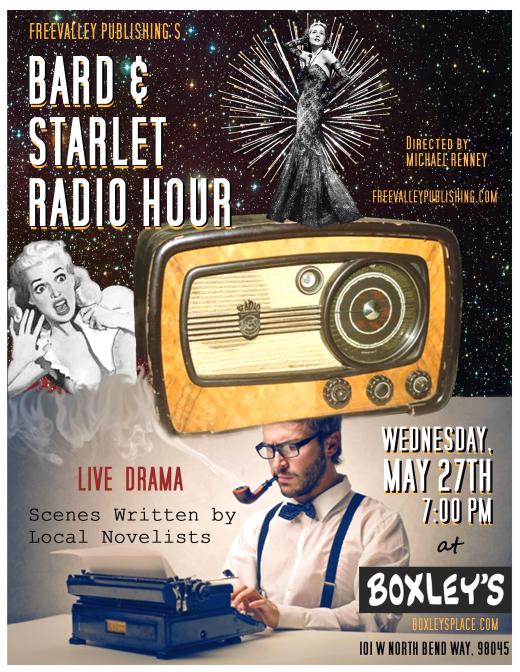 Here’s a spotlight on our actors:

Michael Renney is a local Producer, Director, and Performer. His current projects include Directing the local Summer production of “Neville vs the Demon” and starring in a Seattle production of “Spring Awakening” with Chandelier Productions.

Leslayann Schecterson began acting at the Hartford Stage Company as a teenager & has performed in several productions at Valley Center Stage in North Bend and Theatre Black Dog in Snoqualmie.  Recently she has ventured into playwriting and one act of her first play “A Passion for Discovery” was read at the Playwright Festival at Theatre Black Dog last November.  Her day job is research in molecular neurobiology at the UW.

Dylan Cook is a regular actor with the Valley Center Stage theatre, his most recent role portraying a young Sherlock Holmes. He is proud to be taking up the mantle of the Demon named Wormskull in the Indomitable Spirit Production of “Neville vs the Demon” this summer at VCS.

Craig Ewing has been an actor on stage, in commercials, and film for 25 years, and is currently involved in the production of Steel Magnolias in North Bend at Valley Center Stage Theatre, which opens this Thursday for a three week run.

Scenes by six of our authors will be performed by actors on stage in a style reminiscent of old radio plays…Kind of like your voice-acted audio book comes to life before your eyes!

Be sure not to miss this exciting community event! Free Admission at Boxley’s Jazz Club. We recommend enjoying Boxley’s dinner, snacks and/or cocktails – they’re delicious!  boxleysplace.com