A Bobcat on New Year’s Day!

Posted on January 1, 2017 by sherijkennedyriverside

next to human prints for scale 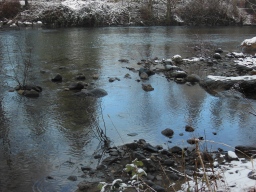 I was standing by this spot when I saw it 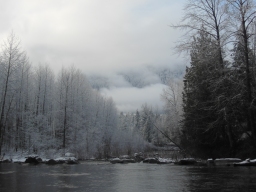 And this was the view looking downriver

A bobcat, indeed! I started off the new year with a gorgeous walk along the river in the snow. When I came to the final river lookout I turned to walk further toward the mountain which was peeking out from the mist. To my surprise, and his, a cat appeared about four feet away as it cleared the bushes. I saw its wide face with wild eyes and large, dark-tufted ears, and then its body turning all in a leap and its strong hind legs launching its bobbed tail away from me. What a beautiful animal!

I captured only its footprints and the large marks from where it scrambled to turn and run. But it was interesting to see the difference been its light footpads on the way to the river and its deeply marked clawed prints with a slip behind as it whisked away.

I added a couple photos from Google images showing as closely as possible how I saw its face. I couldn’t find one with the angle of the retreat I saw, but I included one that shows the stocky legs and a bit of the tell-tale bobbed tail. This was no house kitty!

The last two photos are of the place I was standing when I had this special sighting. What a great way to start the year!

Left brain, right brain, I can't decide. After many years of successful visual arts pursuits, I'm working on my other creative inclinations. For the past 8 years, writing has been my second full time job, and it's worth every sleepless night. Sheri J. Kennedy grew up mostly a city-girl coasthopping from Seattle to rural Pennsylvania, Miami and back to Seattle. She currently resides on the banks of the Snoqualmie River in the scenic Cascade Mountains. Her heart has found its home.
View all posts by sherijkennedyriverside →
This entry was posted in Adventure, Community, nature, pacific nw, Photo, Wildlife and tagged along a river, animal tracks, bobcat, bobcat tracks, New Year's Day, river in the snow. Bookmark the permalink.

11 Responses to A Bobcat on New Year’s Day!